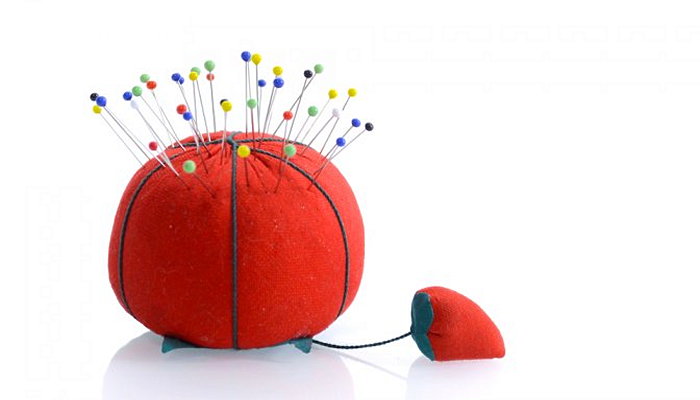 While Susie’s name has been changed to protect the innocent, her story shows how important it is to act quickly, asking your veterinarian for help if you ever have any doubt about the situation.

Susie’s issue has to do an awful lot with the fact that she’s a six-month-old doodle puppy. Being a puppy, she’s very playful and likes to put things in her mouth. This particular day, Susie decided a pin cushion/tomato, complete with pins, was her chew toy of choice.

Susie’s mom called as soon as she figured out what happened; after just a few minutes of thought, she headed my way with said silly pup. An X-ray of Susie’s belly showed what we feared: two bright shiny metal lines in Susie – one in her stomach, one already in her intestines. Susie’s options were to see if the pins/needles would pass or go get them surgically.

A few of my acupuncturist veterinary colleagues have had the occasional patient who did not like acupuncture and would eat a needle. These dogs were fed a big piece of bread and monitored for output. Invariably the needle would pass. While acupuncture needles are not the same as sewing needles, the shape is quite similar. Hoping for good luck, we fed Susie several pieces of bread and monitored her output overnight. By morning, Susie had passed a thin sewing pin. Unfortunately, the thicker shape was still in her stomach and had not moved at all overnight.

Because Susie also had shown some pain and had made a little bit of retching noises in the night, we knew time was of the essence. We prepped her for surgery immediately, and made an incision up high on her belly close to where the stomach is under the ribs. We found that there was indeed a pin stuck in her stomach that had gone all the way through and was poking her liver.

This is quite similar to cattle who have what’s called hardware disease. These cows eat a nail and it goes into the rumen (1st stomach) and stays there and pokes through into the liver and chest cavity, can create terrible infection, pneumonia, and death.

Luckily for Susie, her mom didn’t wait and we acted as soon as we knew there was a problem. Susie recovered immediately, and I mean immediately, as she was back to playing within three hours of surgery. We tried to keep her calm but she just wasn’t going to have it!

Luckily for Susie, her owner acted right away. If her owner had waited a few days to see what happened things could’ve been a lot different. The problems could have ranged from worse pain to torn intestines, stomach, liver, to massive infection and death. Instead, Susie’s back to being bouncy and needing to be monitored to keep things out of her fuzzy puppy mouth. I am so thankful to have been able to help this sweet girl.